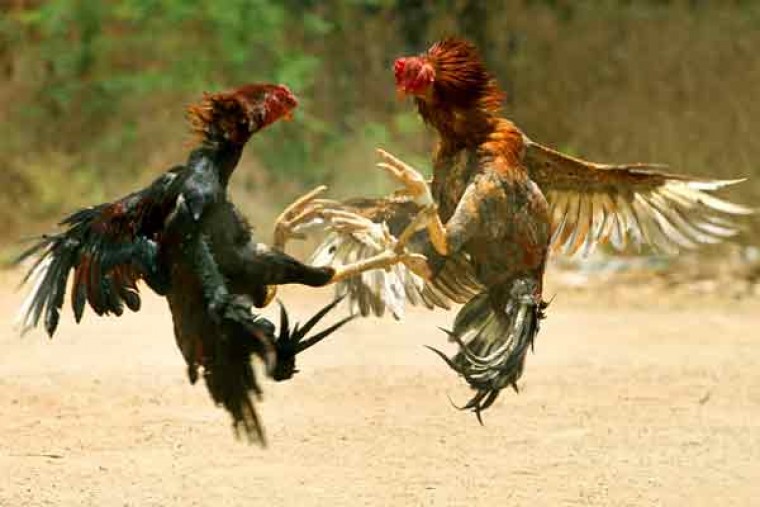 Amaravati, Jan (IANS) Sankranti festivities turned tragic in Andhra Pradesh as two persons were killed after they were attacked by roosters with knives tied to them during a cockfight.

The incidents occurred in Eluru and Kakinada districts in the Godavari region on Sunday.

Padma Raju (20) sustained grievous injuries after a rooster with a knife attached to its leg attacked him near a cockfight camp in Anantapalli village in Nallajerla mandal. Raju had gone to watch the cockfight when one of the roosters pounced on him and the knife attached to its leg left deep cuts on his body. He succumbed while being shifted to the hospital at Nallajerla.

In the second incident that occurred at Velanka in Kirlampudi mandal in Kakinada district, Gande Suresh (43) sustained injuries on his wrist while trying to tie a knife to a rooster. He started profusely bleeding and succumbed before he was rushed to hospital.

The incidents plunged the two families into gloom on a festival day. Despite a ban imposed by the Supreme Court and some measures taken by the police, cockfight competitions were organised in several parts of Andhra Pradesh, especially coastal region during Sankranti.

Crores of rupees changed hands at the competitions organised with the patronage of local politicians.

Wads of currency notes could be seen among the hands of organisers as well-trained cocks with small knives attached to their legs fought amid cheers by the spectators. The fight often ends with the death of one of the two roosters and in some cases both the birds.

Sunday's incidents highlighted how fatal the cockfights are. Animal lovers have been demanding the authorities to strictly implement the orders of the Supreme Court, which banned cockfighting in 2018.